It's been a while since I gave you news about Dragon Cat's Galaxia 1/2, well let's fix that! :D

Last year was the third edition of the Ki-oon mangaka contest. I participated and, since the rules don't explicitly forbid parody, I decided to play the provocation card by sending them a little Dragon Cat's one-shot.

In spite of the absence of any feedback, I had the satisfaction of succeeding in making a 20-page comic in the space of 10 days, from the first line of script to the coloring of the cover and posting it 15 minutes before the end of the contest. There was a little aspect not quite finished compared to what I usually do (the screentones were missing, the FX and the colors of the cover were flat), but still, it's a not bad performance. I will soon be as fast as I was in my teens. x) 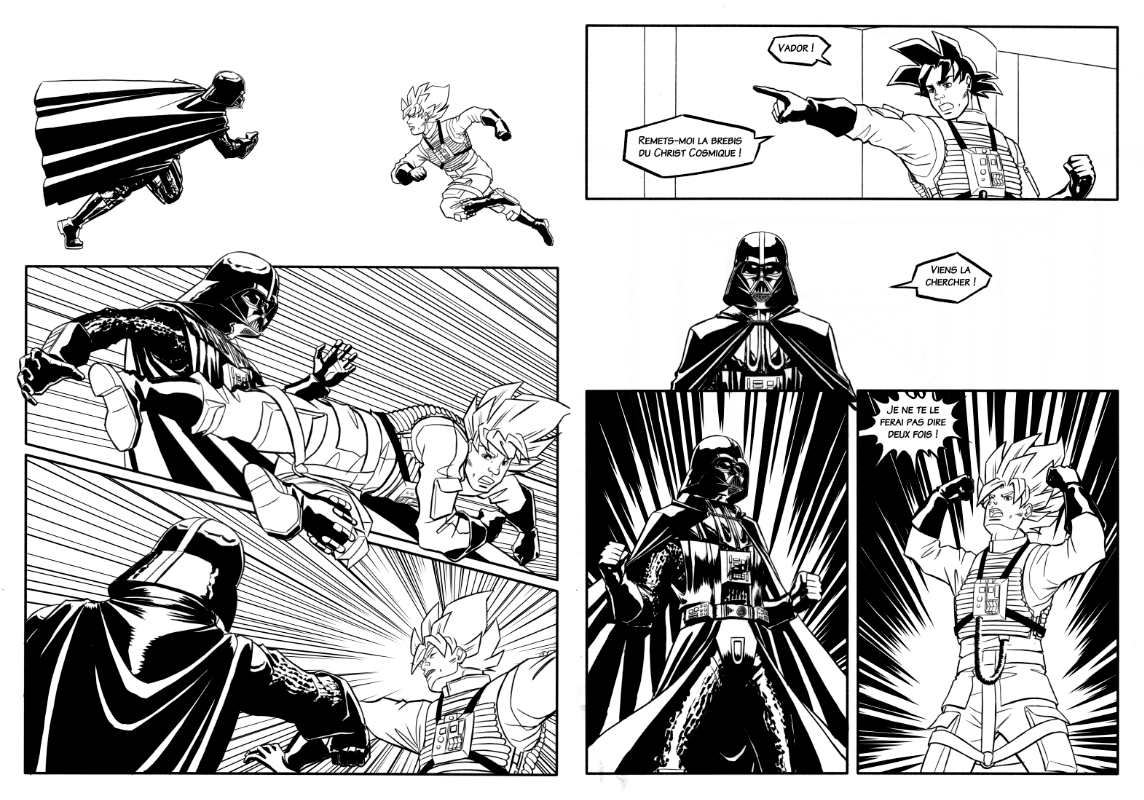 Pages without screentones or FX. 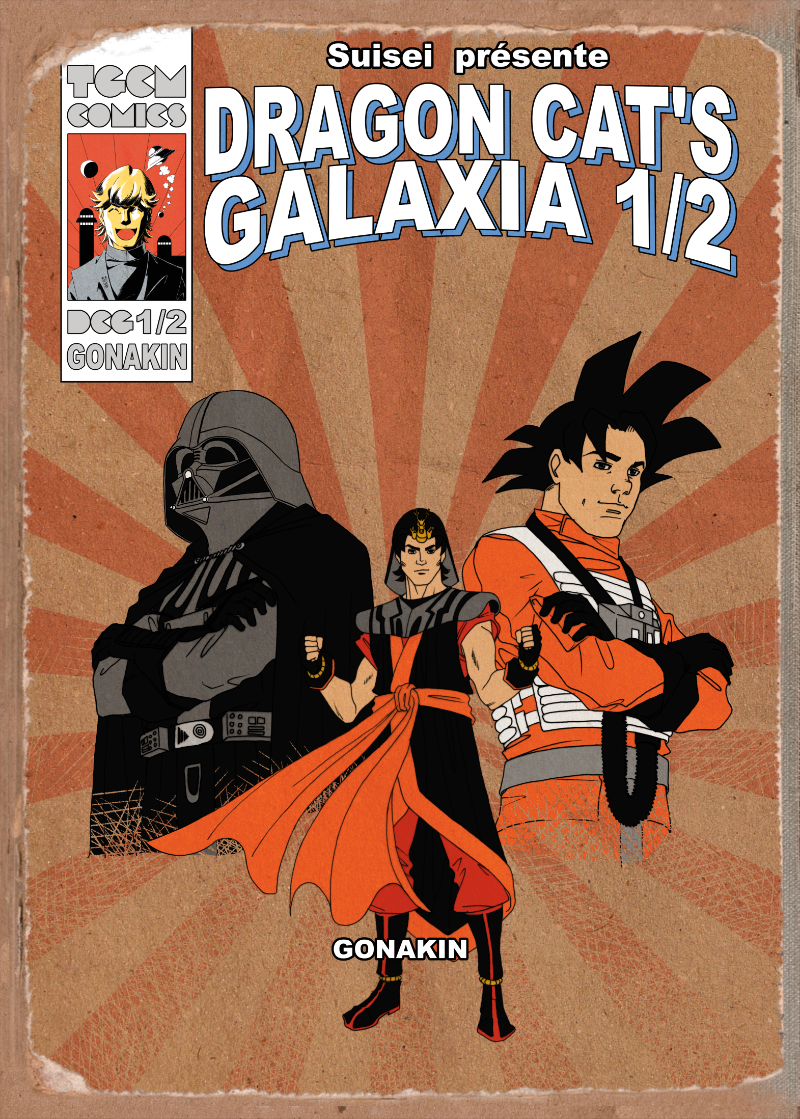 A cover with flat colors, 1h30 watch in hand.

At the beginning of the summer of 2020 the buddy JD came to warn me that the emblematic Japanese magazine of manga prepublication, the Shonen Jump, was opening the hundredth edition of its famous Tezuka contest for the search of young talents internationally! And that Akira Toriyama, the Dragon Ball creator, himself, was part of the jury! :D

The perfect opportunity to send my joke.

So last week I finished the screentones and colors of the cover to participate.
The comic is available in English and Japanese reading way on the website hosting the contest.

I will post it in better resolution and in French as well as in English on my website in the coming days, so feel free to have a look from time to time or simply subscribe to Dragon Cat's here to be notified of the pages publication by email.
I'll take this opportunity to put it back in a western reading way to harmonize with the other episodes of the comic so that you won't get lost when reading it. =) 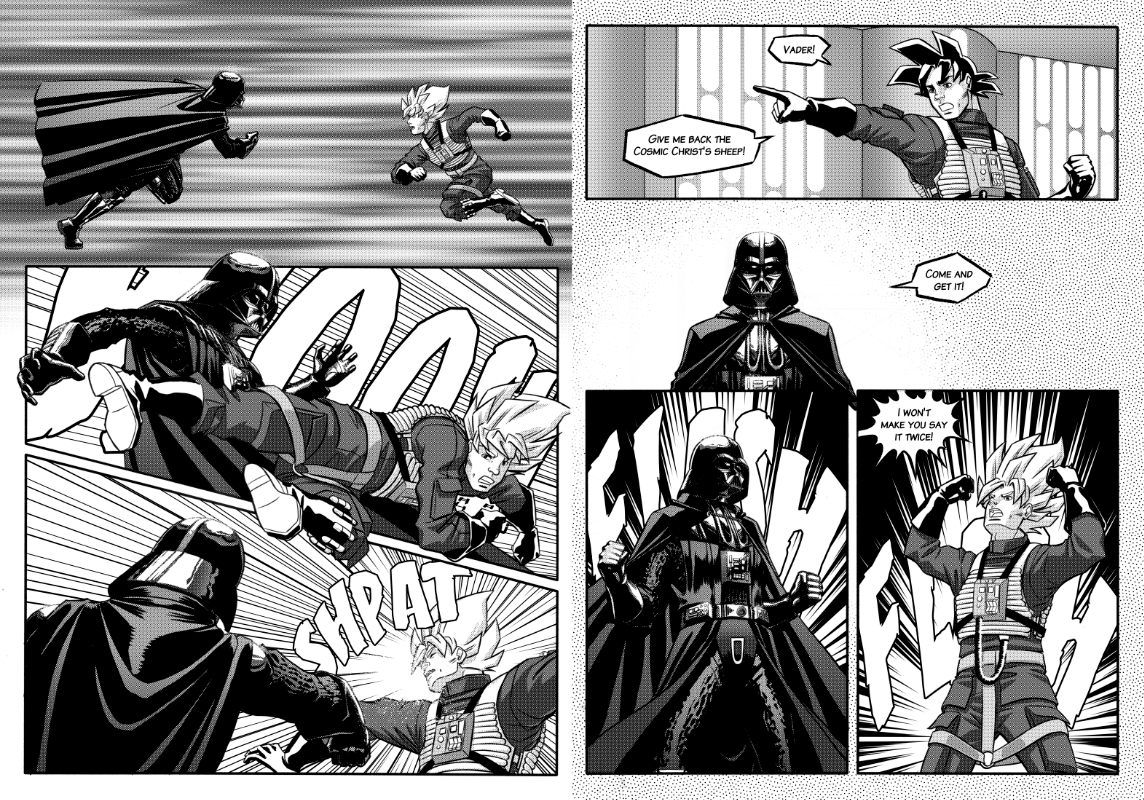 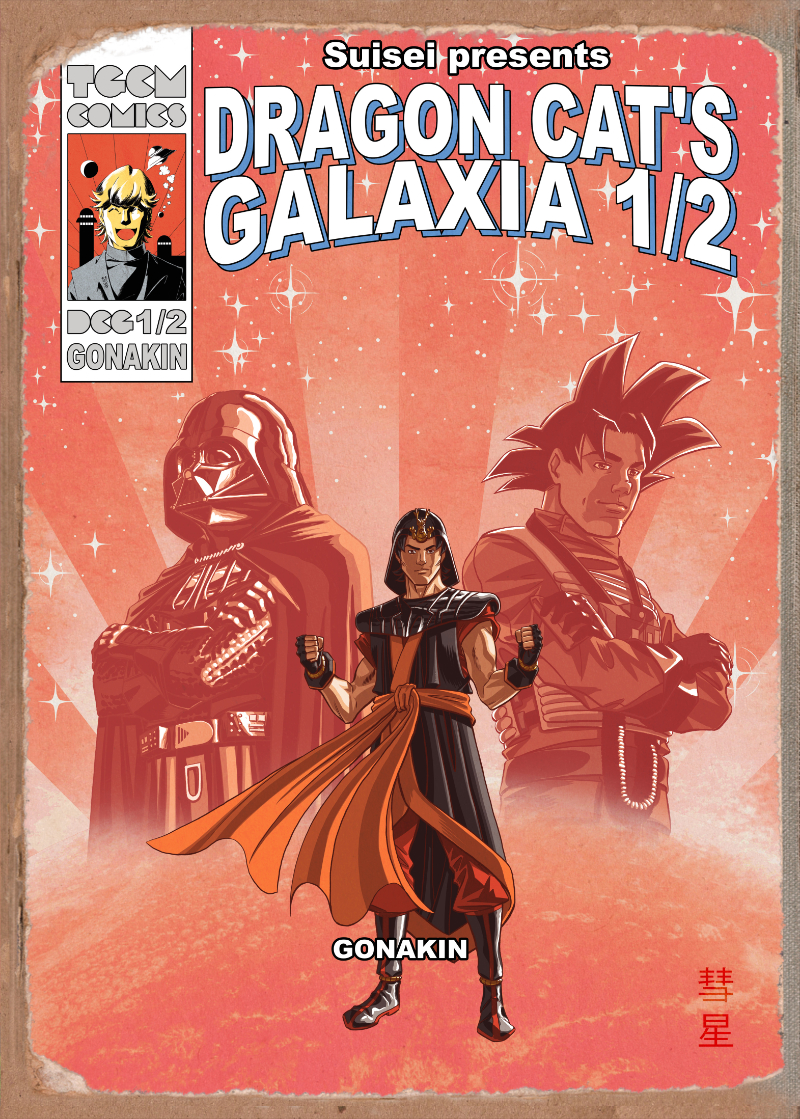 Looks better when it's finished, doesn't it? x)

I'm planning to print this comic, but 20 pages is pretty thin, so I'm going to combine it with another short (very short) story that I plan to do in the next few months. I can already announce you that it will be entitled The crottin's war!
You're not dreaming, we'll talk about cheese in Dragon Cat's. And good cheese! :p
I will tell you more about this little project later.

Otherwise, for the record, this one-shot, Gonakin, is actually the remake of the Dragon Cat's prototype of which I drew the very first pages in 1998, when I was 12 years old. 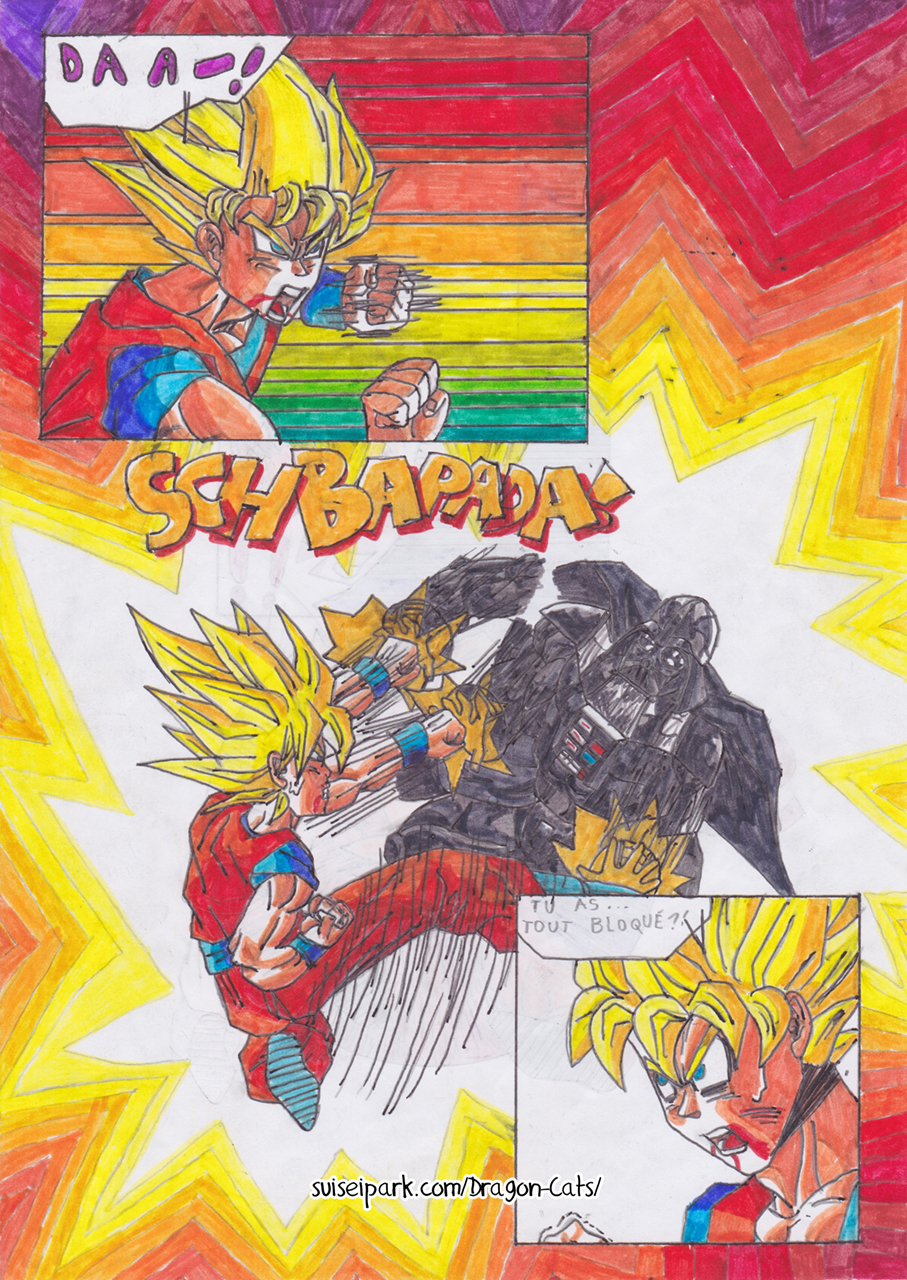 Without retouching, it looked like this. The pages were drawn on both sides. It certainly does not make us feel any younger!

This old version is available online here if you enjoy reading it.
I'll have to think about finishing cleaning and posting the rest, it's still fun all this old stuff.

Today I have two things to announce to you.

The first is that we will be able to meet again IRL.
This time (and for the first time) I venture out of Paris to meet you in the province.
I will exhibit at the comic book festival Normandiebulle, in Darnétal, on 29 and 30 September 2018, among a multitude of other authors! =D 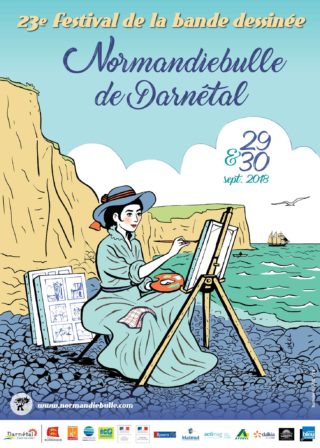 The second news I have to tell you is that after many difficulties, back pain, spats, computer bugs, headaches and so on... 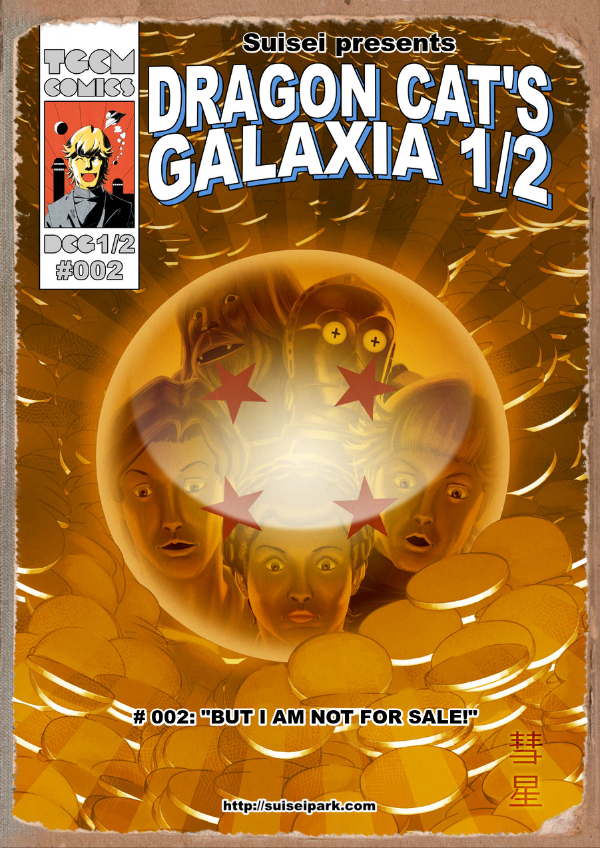 This cover which rocked my world…

You will finally be able to discover the rest of this crazy adventure at the next events where we will meet, starting with Normandiebulle. I’m finishing to build the book, then I'll just have to send the comic book to print. Joy! =D

I can’t wait to show you this brand new and fresh comic book.
Have a good weekend and see you soon! =D

Progress of the chapter 2

I post this message to take stock of the progress of the chapter 2 of Dragon Cat's Galaxia 1/2.

I admit I knew that I had not enough time when I annouced I may finish this chapter for Japan Expo.
Anyway it is always the same way with me. I'm definitly not able to respect deadlines I announce. xD
I finished to ink the third of the pages. Most difficult are behind me (phew!). To finish in time I should finish inking, screentones and the cover before next sunday. It seems not possible even without sleeping. I think I need one or two more weeks.
At least, by trying to believe I can do it, I progressed a lot and I finished the pages I feared the most. =D 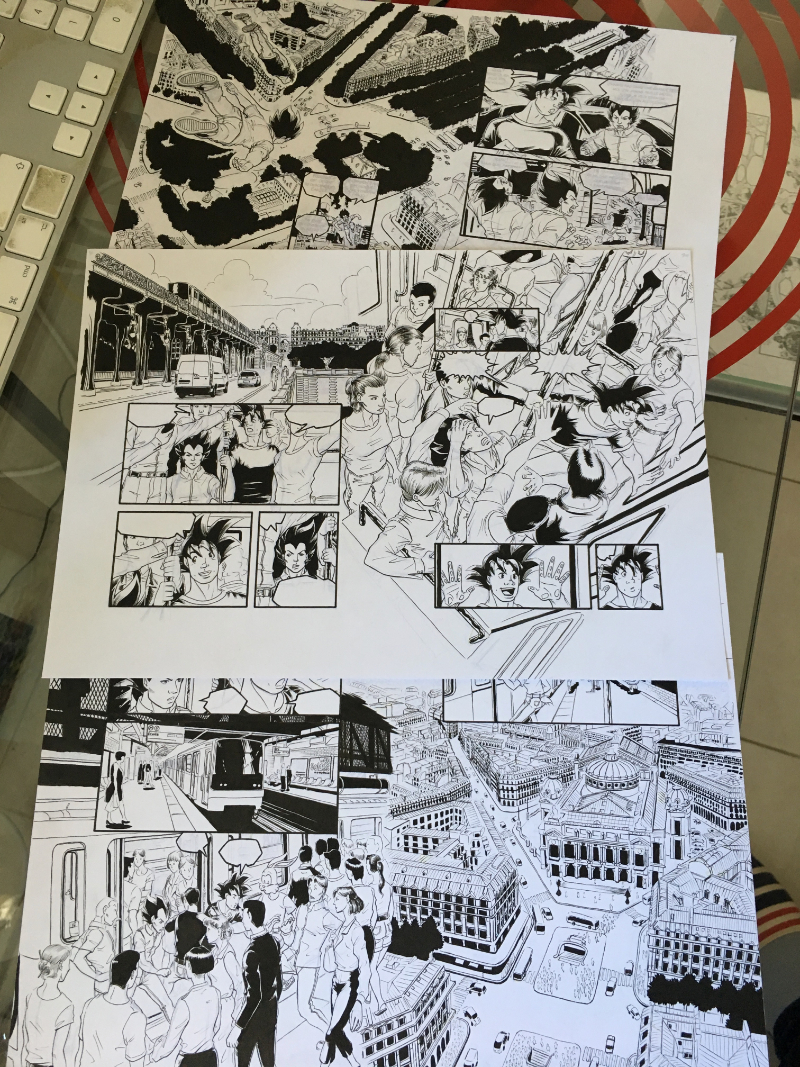 Settings and extras everywhere. This chapter is really hard to draw.
You will see the original pages in preview if you come to the Japan Expo. =D

I had to rush a lot to progress like that. I work very hard, sometimes until to 3 am, for about 3 weeks.
So, I'm going to slacken the pace a little and make some illustrations of heroes from our childhood (Dragon Ball, I have not many illustrations about this one of my favourtite mangas) and I will finish more slowly the chapter 2 of Dragon Cat's during the summer.

That's all for the news.
Have a good week and see you soon ! :D

Today I announce you that I will exhibite at the Japan Expo Paris with my friend Steven Style under the name S&S Associate! :D 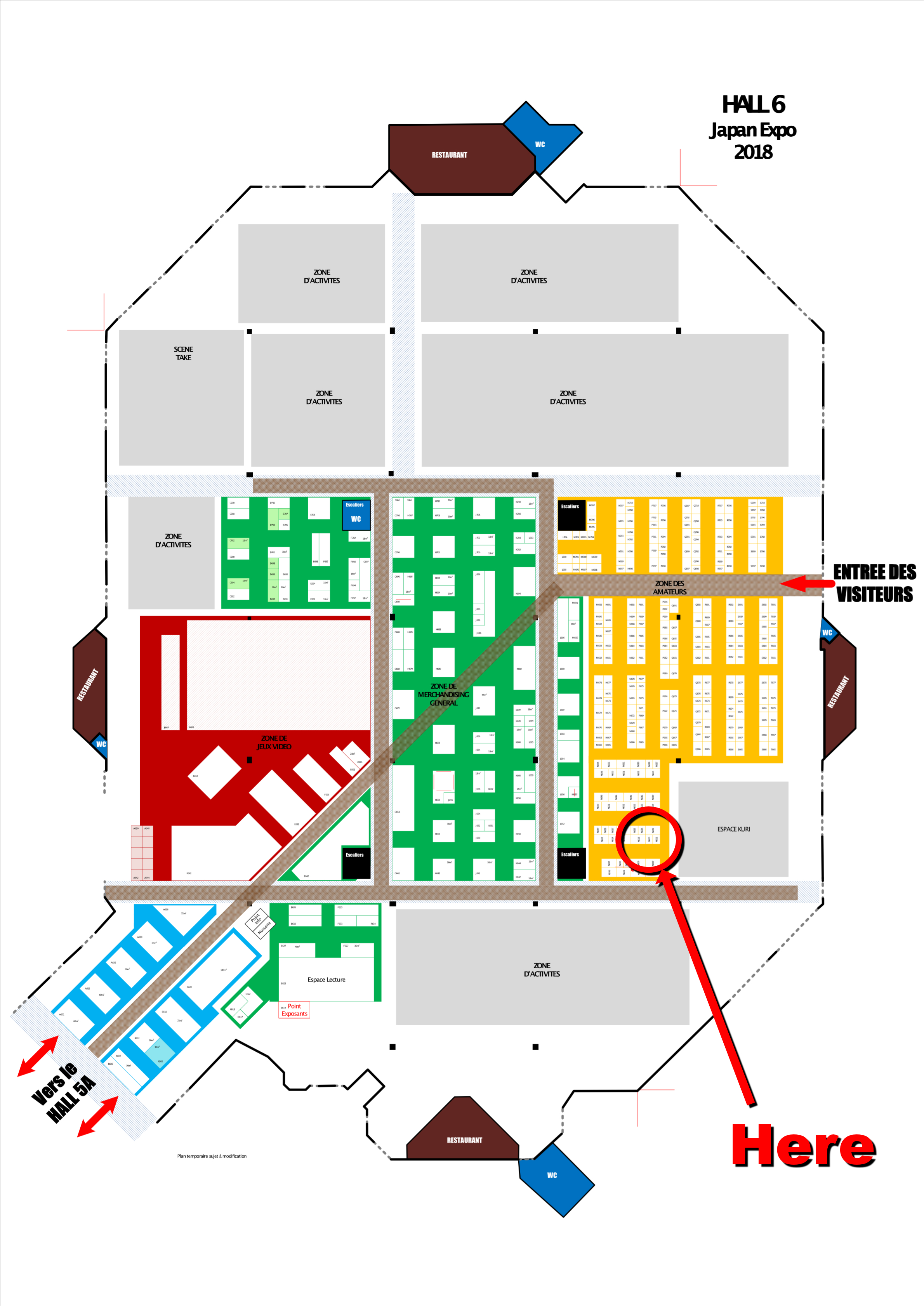 Our stand will be at number N620 in the hobbyist space in the hall 6.

As usual, we will offer you signed comics, prints of our illustrations, artbooks, little commissions and...

The second chapter of my comic Dragon Cat's Galaxia 1/2.

I recently finished the penciled phase and I'm inking the pages. I work very hard to try to finish in time. This episode is really hard to draw with its Berserk syndrom (armies of Stormtroopers, tourists... yes! tourists! and parisians... yes! de parisians!). x) 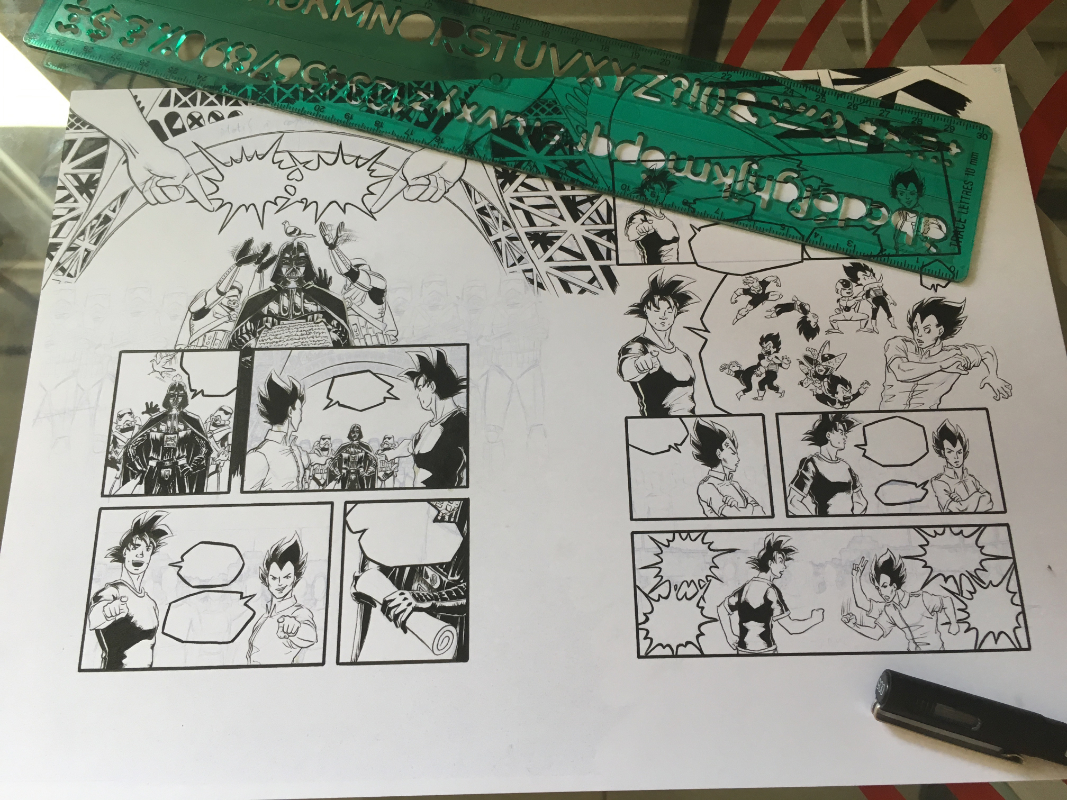 Who will fight Darth Vader? Goku or Vegeta?

If you don't know Dragon Cat's Galaxia 1/2 yet, the first episode is free to read and you can find it by following this link: http://suiseipark.com/Dragon-Cats/language/english/.
I think I will broadcast some drawing live sessions during which you can kick my butt to make me inking and put screentones faster. x)
In the worst case, if I can't do it for the JE, I would have progressed a lot and it will be finished for September's events. ^^ And as I ink this episode in a traditional way, you will see the progress on the originals.

And of course, the JE will be the opportunity to talk and laugh again with you around a candy jar. :D

Have a good day and see you soon! :D